"Cast into a broken world, devoid of purpose. Little of her remain unshattered. Her past buried beneath sand and rubble. Shredded canvas must suffice as Lone Henriksson sets her sails.[1]" 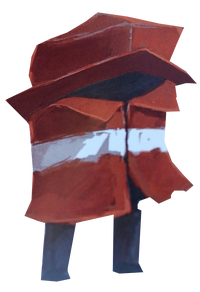 The player character, better known as Lone Henriksson[2], is a young girl in a red rain coat with a white stripe on it. Her face is completely covered by a red hat. Throughout FAR: Lone Sails, you control Lone as she embarks on a quest to traverse the huge dried out ocean with her vehicle, the Okomotive.

Lone Henriksson is a girl of short stature who wears a large red rain coat with a wide white strip across that stretches down to her legs. Her arms are covered by her coat, and she wears black thigh-high boots. Her face is concealed by her red hat and coat collar, leaving her facial features obscured.

This article is a stub. You can help FAR: Lone Sails Wiki by expanding it.